The Current and Future Landscape of Global Islamist Extremism

Previewing his new book, noted terrorism expert Phil Gurski explains why the fall of ISIS will drive an exodus of surviving foreign fighters to wars portrayed as offensives against the worldwide Islamic community.

Outskirts of the battle for Mosul. Mstyslav Chernov, 2016. 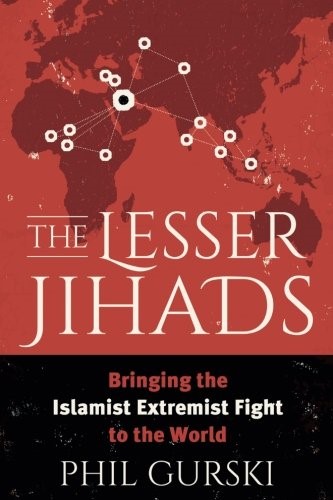 The Lesser Jihads: Bringing the Islamist Extremist Fight to the World

The Lesser Jihads examines conflict through the lens of Islamist terrorist groups. It outlines how terrorists see war, as well as what historical and current events and ideas they use not only to justify violence, but also encourage others to participate.

The ongoing demise of Islamic State (IS) in Iraq and Syria is good news indeed.  Never has the world seen a more brutal and heinous terrorist group whose tactics include, among other atrocities, beheadings, immolations, rapes and mass murder.   We will not miss these extremists and the quicker they disappear from the global stage the better.

IS was singularly successful, to an extent never witnessed on this scale, in recruiting thousands of people from all over the world to travel to the region to join its self-styled Caliphate.  Estimates are as high as 40,000 ‘foreign fighters’ from over 100 nations.  While other conflicts also attracted wannabe jihadis in the past – Afghanistan, Bosnia and Somalia to name but three – IS proved to be by far the biggest magnet.  Many of those fighters died in theatre or will soon do so, whereas some have returned to their homelands either as disillusioned fellow travelers or as committed terrorists keen to carry out attacks or help to radicalise and recruit new jihadis.

There is, however, a third possibility: a new wave of fighters to other conflicts elsewhere in the world.  Just as some of the ‘Afghan Arabs’ who defeated the Soviet Army in Afghanistan in the 1980s moved on to the Balkans or the Caucasus to continue their fight, we will likely see an exodus of surviving jihadis from Iraq and Syria to wars where Muslims and Islam are portrayed as under attack or where extant terrorist groups are already putting out the clarion call for help.

“Our collective inability – or unwillingness – to resolve these conflicts or to bring pressure on the warring parties to negotiate will feed the cycle of killing on both sides for years to come.”

In my third book, The Lesser Jihads: Bringing the Islamist extremist fight to the world, I develop how this future (and current) phenomenon will unfold.  It is important to first see (chapter one) how terrorist groups frame conflict in terms of enemies and targets and how they are the vanguard of defence for the world’s Muslims.  In chapters two through seven I walk the reader through ongoing conflicts in Asia, the Middle East, Africa and Europe as seen through the eyes of jihadi propaganda, based on the themes developed in the first chapter.  There are, unfortunately, dozens of wars and violent encounters between terrorist groups, other violent actors and states currently in progress on four continents, all of which serve as fodder for jihadis to use as justification for ongoing campaigns.  Our collective inability – or unwillingness – to resolve these conflicts or to bring pressure on the warring parties to negotiate will feed the cycle of killing on both sides for years to come.  One does not have to be an apologist for a terrorist group to understand the circumstances under which it can form and thrive in a given region.  It should be obvious that there is enough suffering and injustice to give rise to groups which see violence as the only solution.

The book concludes with the term the ‘Ummahfication’ of violence, a notion that terrorist groups have been moderately effective at portraying certain wars as an offensive against the worldwide Islamic community – the Ummah.  This appeal will continue to resonate with a small percentage of Muslims who radicalise to violence in part because of what they see happening to their brothers and sisters in lands both near and far away.

While I make no attempt to ‘predict’ the next big jihad – after all, no one that I am aware of ‘knew’ that the Arab Spring as it manifested itself in Syria would turn into a disastrous civil war and lead to the creation of IS – it is nevertheless likely that most of the conflicts discussed in this book will fester and that some will grow in intensity.  We have not seen the end of war in which terrorists and terrorist groups have a role to play.

Phil Gurski
Phil Gurski is the President and CEO of Borealis Threat and Risk Consulting Ltd.  He worked as a senior strategic analyst at CSIS (Canadian Security Intelligence Service) from 2001-2015, specializing in violent Islamist-inspired homegrown extremism and radicalisation.  From 1983 to 2001 he was employed as a senior multilingual analyst at Communications Security Establishment, specialising in the Middle East.  He also served as senior special advisor in the National Security Directorate at Public Safety Canada from 2013, focusing on community outreach and training on radicalisation to violence until his retirement from the civil service in May 2015, and as consultant for the Ontario Provincial Police’s Anti-Terrorism Section (PATS) from May to October 2015.

He regularly blogs (Terrorism in Canada and the West – available on his Web site) and tweets (@borealissaves) on terrorism.  He is a professor of intelligence in the School of Emergency Management (Security, Intelligence and Counter Terrorism certificate programme) at George Brown College in Toronto, an associate fellow at the International Centre for Counter Terrorism (ICCT) in the Netherlands, a fellow at Carleton University’s Norman Paterson School for International Affairs  (NPSIA), a digital fellow at the Montreal Institute for Genocide Studies at Concordia University and an affiliate of the Canadian network for research on Terrorism Security and Society (TSAS).  Mr. Gurski is a regular commentator on terrorism for a wide variety of Canadian and international media.