On 18 July 2018, CIC Vancouver in partnership with the Asia Pacific Foundation of Canada, held a public speaking event on Asian security competition and the future of the Association for South East Asian Nations (ASEAN). The speaker for the brown-bag discussion was Dr. Stephen Nagy, a Distinguished Fellow of the Asia Pacific Foundation of Canada. Dr. Nagy provided a comprehensive and thoughtful overview of the dynamic security situation in Asia, analyzing the geopolitical realignments driven by the China-led Belt and Road Initiative (BRI) and the implications this portends for ASEAN.

Background
China’s growing economic, military, and diplomatic footprint in Asia is re-balancing power relations in the region. Specifically, China’s ambitious Belt and Road Initiative (BRI) is integrating the Asia region and unseating ASEAN as the primary driver of Asianregionalism. This development raises strategic questions about whether ASEAN will remain a key anchor in the regionalization process as other Asian countries re-calibrate their national interests to manage the escalating China-U.S. rivalry.

Key Takeaways
• China’s use of “infrastructure” diplomacy as a political game-changer in Asia is not a risk-free venture. In addition to elevating strategic competition between the US and China, the Belt and Road Initiative (BRI) will impose an economic burden on Eurasian countries, including the cost of sustaining considerable human and capital investments over a prolonged period.

• Notwithstanding ASEAN’s reputation as a “spent force” due to its internal disunity, new institutional arrangements including the recent Japan-EU trade deal and an emerging “Indo-Pacific” framework or “Quad” (eg., US, Japan, Australia, India), might serve as an effective counterweight to China’s geo-political and geo-economic aspirations in Asia.

• Canada should leverage its hard-won status as a middle-ranking power to negotiate economic opportunities in Asia, given the region’s enormous growth potential. Coincidentally, Canada has an opportunity to perform a leadership role in supporting the governance and legal institutions which have been critical for Asia’s economic and political security.

His recent funded research projects are Sino-Japanese Relations in the Wake of the 2012 Territorial Disputes: Investigating changes in Japanese Business’ trade and investment strategy in China. Currently, he is conducting a long-term research project entitled Perceptions and drivers of Chinese view on Japanese and US Foreign Policy in the Region funded by the Japan Society for the Promotion of Science (JSPS) and participating in a book project called Chinese International Relations Theory: As Emerging from Practice and Policy. 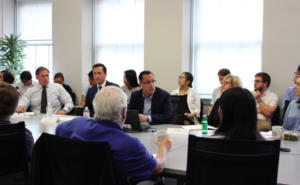