Myanmar: What If You Knew Her Dead and Lying On the Ground!

The first news flashes across your phone in text form: “Myanmar security forces open fire on protesters, killing at least 18, according to United Nations.” The death toll is rising and, many weeks later, is over 700. 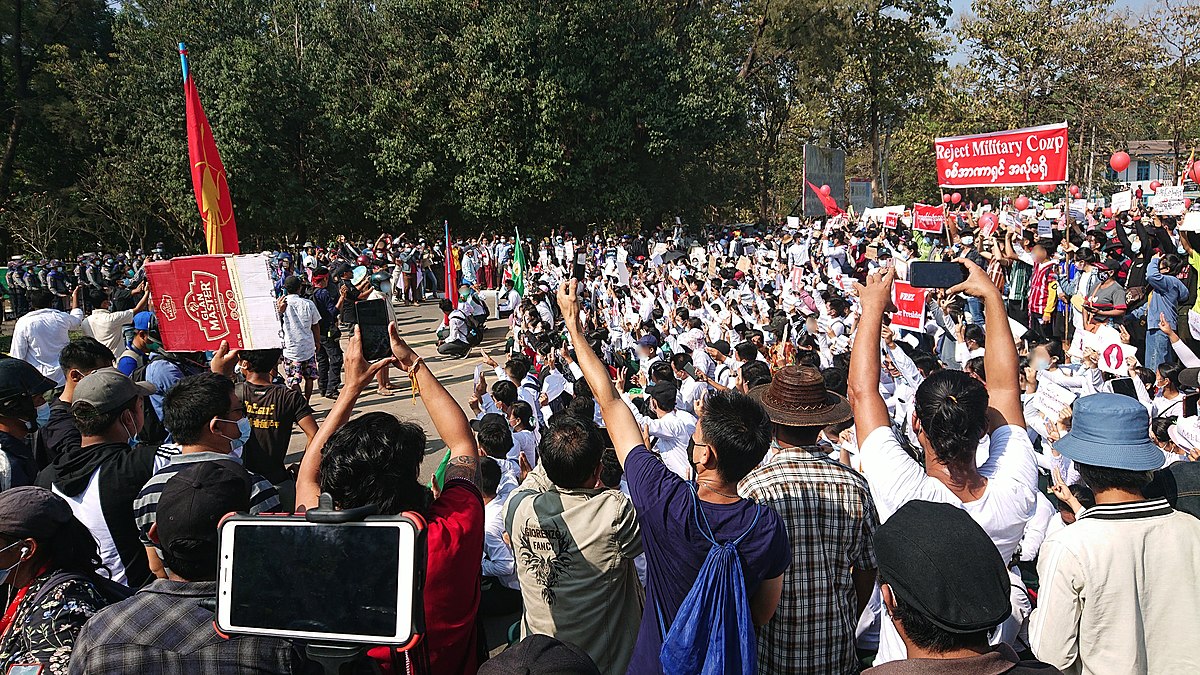 Protests Against Coup, Photo from Wikipedia Commons, CC BY-SA 4.0(Ninjastrikers)
The first news flashes across your phone in text form: “Myanmar security forces open fire on protesters, killing at least 18, according to United Nations.” The death toll is rising and, many weeks later, is over 700.

Initially, we react with outrage, sadness, and a desire to stop the general insanity of the military coup. Amidst the general apathy in society to any peril beyond Covid, however, and the lack of political leadership globally, perhaps nothing can be done but shrug and move on to the next tweet. It certainly is easier than seeing the people of Myanmar struggle for their collective freedoms. Add to that the balanced but defeatist wisdom of diplomats that anything beyond sanctions against the Generals involved in the coup would require risk.

But surely, we can do better. Rather than passively waiting for the citizens on the streets of Myanmar to reverse the military coup, or for the struggle to become bloody enough to suppress it, a coalition of progressive countries should make the cost of that coup higher for its leader, General Min Aung Hlaing.

This proactive response can be undertaken by creating a significant economic aid package with donations, loans and investment that triggers a stand down. By offering this package to the people of Myanmar, contingent on the military stepping down and returning to its barracks, it shows clear support for the people. The military must restore the elected government under the National League of Democracy and must eventually commit to further reforms that reduce the military’s de facto control of national security, key areas of the economy, and the constitution.

An orchestrated offer of economic assistance from a coalition of progressive countries makes it harder for the military to justify its coup. This is a country where the government’s annual budget is US$ 24 billion and the GDP per capita is under US$ 1,500 per person. Moving the prosperity needle for the 54 million citizens of Myanmar would be a cheaper alternative than the prolonged impact of a coup. It is also a feasible minimum financial target to offer as the cost for the donor countries and foundations, when spread out, is within existing budgets.

Development assistance for at least US$ 1.2 billion a year for five years to the government, and a package of support of the same amount to civil society, would have an impact on the non-government structures and process that help foster democracy. It will be hard for the military to justify its coup if it is costing not only the national treasury but also the pocketbook of each citizen who stands to benefit from a return to the still unfinished path towards a new democracy.

This is also a clear sign that liberal democracies stand behind their belief in elected governments, freedom of expression, religion and the rule of law. The most recent battleground or opportunity to win this contest is on China’s southern border and is presented in Myanmar. This border is a major channel for illegal drugs, jade, timber, and wildlife trade. The restoration of democracy will plug this illegal trade that has historically been the purview of the Myanmar military elite. It is something, with careful diplomacy that China’s foreign affairs leadership might support.

Global Affairs Canada can build on the experience of the financial support that Bob Rae provided the Rohingya when he was a special envoy to Myanmar. Now that Mr. Rae is Canada’s Ambassador to the United Nations, he is well-positioned to start this coalition. Ambassador Rae stated a short while ago that more needs to be done.

The creation of a strong, well-organized response will demonstrate that the Biden Administration and its allies believe that elected governments should not be indifferent to global events. Over time, it will also help to plug the illegal trade traditionally exploited by the military to line their pockets.

Myanmar is a test case for the will of democracies.  The current sanctions are no more than symbolic; a tool of minimalists. To the military officials that are sanctioned, they are the cost of doing business. To arrange and deliver robust economic assistance after the democratically elected government of Aung San Suu Kyi is reinstated would be a proactive step to bolster democracy.

Parliament in Ottawa must wake up, give the government non-partisan support and mandate Foreign Affairs Minister Marc Garneau to act. The first necessary step is a phone call from the Prime Minister, or Foreign Minister Marc Garneau, to Ambassador Rae to galvanize the United Nations to act. If the UN is unable, democratic societies in Asia and outside of Asia need a coalition of countries willing to stand with real commitments to the people of Myanmar.

With that one phone call, Canada would no longer be a spectator with tickets to the world stage; we would be an actor again. Governments of both Conservative and Liberal stripes have claimed that democracy is at the heart of Canada’s foreign policy. Action on Myanmar would show that this is more than mere rhetoric.  In the haunting but not dated lyrics of Neil Young in Ohio “…what if you knew her lying dead on the ground.”

Within Myanmar, there was, before a coup, a sense of irony amongst some that the writings of George Orwell helped liberate Burma from colonialism and from military rule. One of his quotes is appropriate “All tyrannies rule through fraud and force. But once the fraud is exposed they must rely exclusively on force.”

Author
John Gruetzner is the volunteer head of fundraising for the China Policy Centre. He is also the co-founder of Intercedent and sits on the Board of a number of public and private organizations. He graduated from the University of Toronto and also attended Nankai University in China for a year in 1982. Prior to returning to Canada to join a Canadian technology firm to oversee global business development he worked and lived in China for 38 years. He also writes and teaches on doing business in China.