Has the Wave Broken? Populism’s Rise and the Transatlantic Relationship

On April 30, 2018 in Toronto, the National Office of the Canadian International Council hosted the Right Honourable Douglas Alexander for the inaugural Big Issue Lecture “Has the Wave Broken? Populism’s rise and the transatlantic relationship.” David Common of the CBC served as moderator for the event.

Drawing upon his experiences as a former UK Europe Minister, Trade Investment and Foreign Affairs Minister, and U.K. Governor of the World Bank, Alexander examined the complexities which surrounded the Brexit vote in the UK, the rise of populism across the West, and the impact of the changing nature of politics on the transatlantic relationship. He drew upon the key influencers of voter attitudes such as the Global Financial Crisis, economic instability, immigration, and the rise of social media, to explain the advance of populist movements in Britain, across Europe and in the USA. Finally, Alexander discussed what this changed political landscape means for politics of the centre ground, and whether we can counter the rise of populism or whether we are destined to a decade of populist politics until it runs its course. 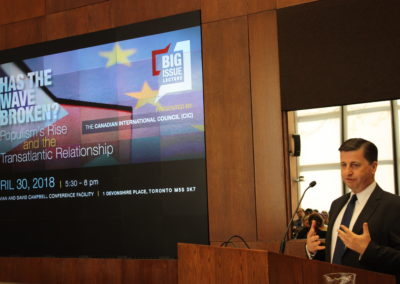 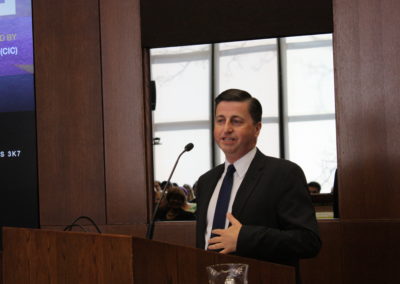 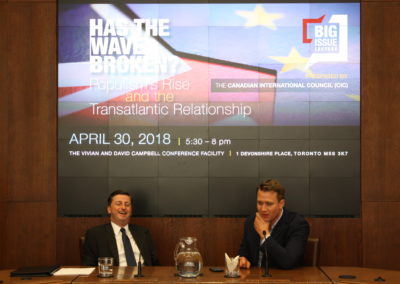 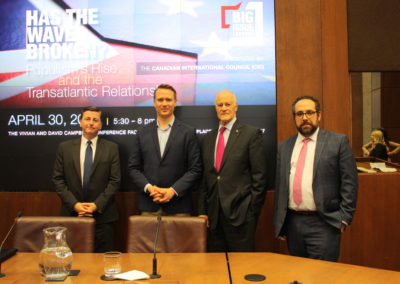 The Right Honourable Douglas Alexander is currently a Senior Fellow at the Harvard Kennedy School, and a visiting Professor at King’s College, London. He is a member of the UK Privy Council and a member of the European Council on Foreign Relations, and a Trustee of the Royal United Services Institute. Mr Alexander previously served in various Ministerial positions in the U.K. Government for nine years, and as a Member of the UK Parliament for eighteen years. Mr Alexander served as Minister of State for Trade, Investment and Foreign Affairs, and Minister of State for Europe, Secretary of State for Scotland and for Transport. He also served as the UK Secretary of State for International Development leading over 2500 staff based in 39 countries with a budget of $10.6 billion. As the UK’s Governor to the World Bank, he negotiated successfully for reforms including additional representation for developing countries and decentralisation of bank operations.

David Common is a host of Marketplace and a Correspondent with CBC News. David has reported from more than fifty countries, previously holding roles as New York Correspondent and Europe Correspondent based in Paris. He’s covered the Boston Bombing, Hurricane Sandy, flown on military aircraft in the air war against Libya, spent more than a year total covering the Afghan conflict, worked on ships combating pirates off Somalia, plying Arctic waters in the Arctic and been at the site of Titanic’s sinking a hundred years later. David was born in Winnipeg, grew up in Toronto and has lived across Canada. David attended York University in Toronto and Stockholm University in Sweden. He has received several awards, nominated for a Gemini twice – winning once under the Best Reportage category.