A fragmented approach to Asia Pacific relations harms Canada’s standing in the region.

HMCS Algonquin departs from Pearl Harbor to participate in exercise Rim of the Pacific (RIMPAC) 2006. RCN

In partnership with SAGE Publications, one article of key significance from every new issue of International Journal is chosen to be featured in the IJ Spotlight Series. The unabridged version of this article was originally published in Vol. 73 No. 1.

While multiple Canadian governments have asserted it is in our national interest to be active in the Asia Pacific[i], Canada’s recent military and security record shows a lacklustre—and even dwindling—presence. Here we draw from our larger article to provide a brief feature of Canada’s actual presence in the Asia Pacific defence and security agenda from 1990-2015.[ii] Our empirical materials and analysis show that despite declared interest in the region, Canada has yet to become or be seen as a full partner with sustained commitments. This reality is especially clear when observing the trends in Canada’s multi-track diplomacy engagement and regional security activities in the Asia Pacific.

A Look at the Trends

Beyond a few “enhanced engagement” documents and Canada’s so-called “Year of the Asia Pacific” (1997), the region has not occupied much space in Canadian Foreign and Defence policy, despite the now-common reference to Canada as a “three-ocean country.”

Canada’s Department of National Defence (DND) says little in any formal way about the government’s defence and security commitments to this area of the world. The most recent statement, the National Defence Review’s paper, Strong, Secure, Engaged, again offers little attention to the Asia Pacific region although it does announce long-term investments meant to strengthen Canadian Armed Forces (CAF) capabilities.[iii]

Global Affairs Canada (GAC) and its predecessors have occasionally noted the growing significance of Canada’s relations with Asia Pacific countries and with regional institutions such as the Association of South East Asia Nations (ASEAN) or the Asia-Pacific Economic Cooperation (APEC) forum; but their focus is usually on economic opportunities, trade and investment, and immigration.[iv]

When we turn to the historical record, the data show that even overall Canadian multi-track diplomacy[v] in the region takes advantage of just a small portion of engagement opportunities. For example, Canadian scholars, as well as officials from Canadian International Development Agency (CIDA) and Foreign Affairs, provided considerable support to t1.5 and t2 initiatives between 1990 and 2015. However, the frequency and scale of these activities, especially post 9/11, quickly outpaced Canada’s ability or interest. The figure below offers a striking illustration of Canada’s (and DND’s) relatively constant levels of activity in multi-track diplomacy compared to a dramatic increase in the region overall.[vi] Regardless of whether such relative inactivity was intended, it is problematic in a context where there has been a general increase in security and defence activity in the Asia Pacific, but no corresponding increase by Canada. As the following examples demonstrate, Canada’s Asia Pacific allies have noticed this gap. 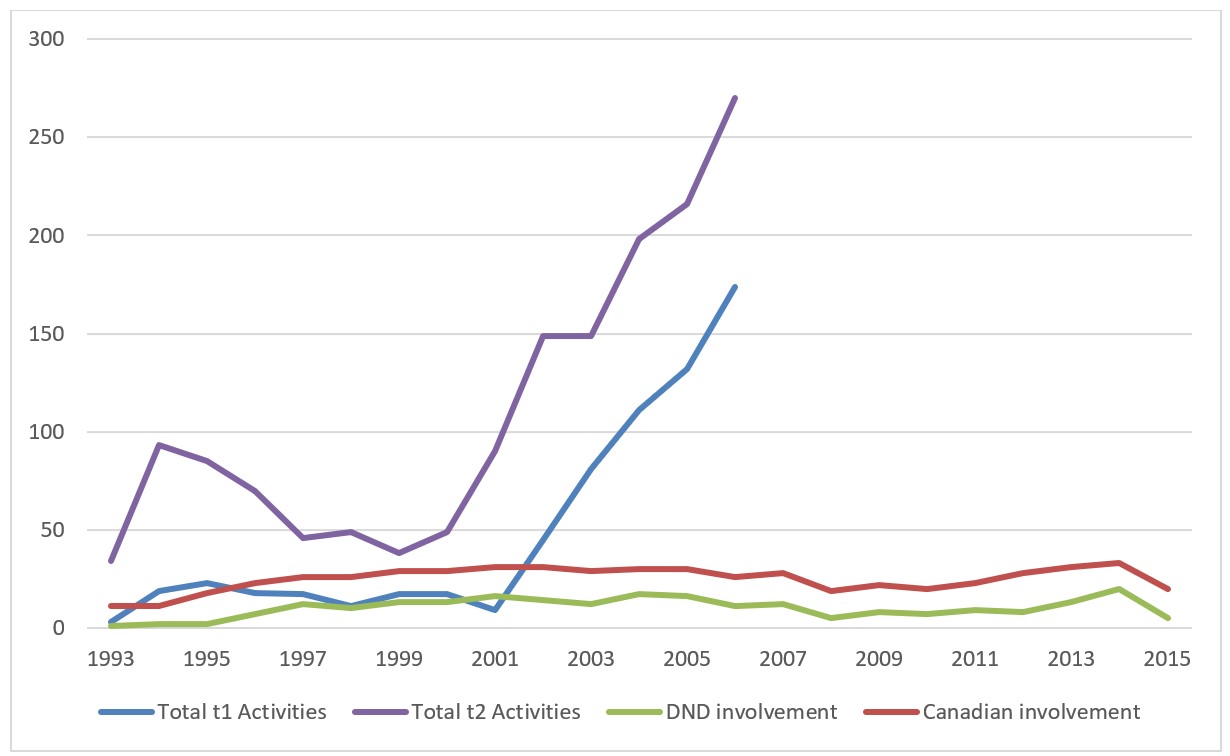 First, while Canada’s early commitments to ASEAN and the ASEAN Regional Forum (ARF) did enable Canadian participation in some important meetings (i.e. the Eminent Persons Group), the overall record of its relationship with ASEAN reveals fairly passive, tag-along traits. For example, Canada was the last of the dialogue partners to sign the ASEAN-Canada Joint Declaration for Cooperation to Combat International Terrorism (on 28 July 2006) and last to accede to the 1976 Treaty of Amity and Cooperation in Southeast Asia, in 2010.

The Shangri-La Dialogues tell a slightly bleaker story, even though Canadian participation in these dialogues has been fairly consistent since the mid-2000s. High level Canadian officials have only occasionally attended these important meetings, while other countries ensure that their foreign and/or defence ministers regularly participate. Because of its modest presence, Canada has often failed to fully utilize this opportunity to strengthen relationships in the region.

Beyond government activity, a small group of Canadian academics played a significant role in creating and co-creating, respectively, the Canadian Consortium for Asia-Pacific Security (CANCAPS) and the Council for Security Cooperation in the Asia Pacific (CSCAP), thus providing two principal venues for t1.5 and t2 activities. Academic focus on these activities was strong in the 1990s, but the meetings rarely involved DND officials or CAF officers. However, following a decade of reduced research and conference support in the 2000s due to cutbacks in Ottawa, Canada ceased being a member of CSCAP by 2016.

These three examples, along with Canada’s continued exclusion from two key strategic forums—the ASEAN Defence Minister’s Meeting Plus (ADMM+) and the East Asia Summit (EAS)—offer evidence of our declining and/or insufficient engagement in the region. Consequently, Canada currently has little role in shaping the region’s future security architecture.

The Data, Strategy, and Complexity Problems

This brief overview points to three key problems in Canadian foreign and security policy. For the scholar or analyst, one such problem is related to data. An explosion of activity has also meant much more to record and examine. Our paper brings together significant previously uncompiled data, but there is also much that simply does not exist. A lack of consistent and thorough records[vii] means that researchers, GAC and DND officials and analysts struggle to systematically evaluate these activities’ contributions to Canada–Asia Pacific relations, which inhibits resource allocation decisions and longer-term strategy.

The strategy problem is particularly salient in the Asia Pacific, where Canada is still trying to secure a seat at the table at some of the most prominent security organizations (i.e., ADMM+ and EAS). Indeed, Canada was “at the table” following the end of the Cold War, in terms of initiating proposals and investing in initiatives on the future of Asia-Pacific security[viii], but is no longer actively involved in shaping the region’s future security architecture. One reason for this is the substantial diversion of resources and attention to Afghanistan following 9/11; but fragmentation and a lack of inter-departmental collaboration are also to blame. For example, the role allocated to Maritime Forces Pacific (MARPAC)—the major CAF department assigned to the Pacific coast, responsible for Asia Pacific defence and security matters—is understandable, but it has led to a siloed approach. This fragmentation undermines confidence among Asian counterparts, especially given MARPAC’s declining presence in multi-track activities since 2010. Without an Asia Pacific engagement strategy[ix], diplomatic activities emerge in an ad hoc and reactive way, resulting in “missed opportunities” for Canada-Asia Pacific relations.

Finally, the examples in this short article and in our larger piece highlight the complexity of operational and strategic relationships between government departments, private corporations, and international organizations. They also demonstrate, empirically, the “broadening” of the concept of security in terms of issues and actors, and the subsequent explosion of security-related activities in the region. Unsurprisingly, the complexity of this post-Cold War environment has produced unique challenges for Canada (and others).

New regional dynamics have emerged in the Asia Pacific since 1990: a stronger and more assertive China; emerging regional and sub-regional organizations; and the ‘‘pivot’’ by the United States towards Asia. Canada has played a mediating and mitigating role in developing enhanced cooperation here in the past and has repeatedly indicated a desire to play such a role again. But for Canada to be a more effective, and productive partner, it must commit to and be seen as, being fully engaged in the peace, security, and prosperity of the Asia Pacific.[x] To this end, we highlight three policy-oriented recommendations.

First, the point is not that Canada needs to engage in everything; as demonstrated by the graph above, this would be impossible. Rather, a focused and synergistic allocation of scarce resources would best serve Canada’s longer-term interests both at home and internationally. Second, serious participation in all three diplomacy tracks by Canadian officials and experts should be understood as a valuable contribution to international security and defence dialogue, that also supports and stimulates new expertise here at home. To strengthen this participation, GAC, DND, and other branches of the Canadian Government should increase inter-departmental coordination of assets and broaden collaboration with non-government experts. Further, and finally, Canada’s siloed approach to the security architecture of this region needs to be re-evaluated. While this approach may be the result of default, rather than deliberate design, it can have an unintended effect of signaling to Asian counterparts a lack of Canadian commitment to the region. Effective diplomacy leading to stronger bilateral relations and a regional presence requires participating in the full agenda of inter-state relations.

[i] We use the term “Asia Pacific” to refer to parts a geographical area that includes countries bordering the Pacific Ocean but also those countries commonly referred to belonging to the “Indo-Pacific” region as well.  We recognize that the term is contested and that the implied distinction between “Canada” and the “Asia Pacific” is a constructed and problematic one, as the flows of people, ideas, identities and values are much more fluid than implied by these bounded spatial terms.

[ii] Much of the empirical materials presented here and in our larger article are drawn from our previous report, “A Mapping Exercise of DND and CF activities related to Asia Pacific and Indo Pacific Security, 1990-2015” (Ottawa:  Defence Research & Development Canada, Centre for Operational Research and Analysis, April 2016): 1-116.  As of this writing, the paper has yet to be posted on the CANDIS website.  Those interested can contact the first author <ddewitt@yorku.ca>.

[iv] The most recent statement (not a full policy review) came in the House of Commons where the Minister of Foreign Affairs spoke to the government’s principles, perspectives, and priorities concerning Canada’s international policies and commitments. The Asia Pacific is not mentioned. See “Address by Minister Freeland on Canada’s foreign policy priorities,” (Ottawa, House of Commons, June 6, 2017), available at: https://www.canada.ca/en/global-affairs/news/2017/06/address_by_ministerfreelandoncanadasforeignpolicypriorities.html

[v] Track 1 diplomacy (t1) refers to official government-to-government activity; t1.5 formally involves a mix of officials with non-official experts, usually academics; t2 refers to activities involving senior academics or other non-official experts that brings together original research with a concern for policy, both initiatives and critique, and usually leads to the results of this work purposefully informing policy makers.

[vii] During our research, personnel in both GAC and the DND noted the problems faced with poor record-keeping; inadequate access to institutional history regarding policies, rationale, and operations; and even a useful breakdown of budgetary information accessible in terms of informing new policy and deriving lessons learned.

[ix] The most recent hint of a comprehensive Asia Pacific strategy was the 2015 Plan of Action to Implement the Joint Declaration on ASEAN-Canada Enhanced Partnership for the period 2016-2020. Arguably, though, much of the plan just reiterates and calls for “more” of what Canada has already done with ASEAN and the ARF over the last two decades.

Jinelle Piereder is a PhD candidate in Global Governance at the Balsillie School of International Affairs, University of Waterloo, where she specializes in conflict and security. Her dissertation research focuses on ideological conflict in public policymaking and global governance from a complex systems perspective. Additional research areas include food security and sovereignty, conventional arms trade and control, nuclear non-proliferation, non-state actors in the Canadian peace sector, and, methodologically, emerging applications of network theory and analysis. She has participated in a project focusing on air defence identification zones (ADIZs), and land and sea disputes in East Asia.

Alex Brouse has an MA in Global Governance from the Balsillie School of International Affairs, University of Waterloo. This was followed by an internship at CSIS Jakarta focusing on maritime security and economics. His academic work has focused on security and economics in the Asia Pacific. He is currently a policy analyst for the Government of Nunavut, and is enjoying exploring Northern Canada.