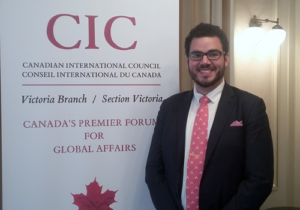 On 10 October 2018, CIC Victoria was delighted to hear from Dr. Wilfrid (Will) Greaves, Assistant Professor of International Relations at the University of Victoria and a noted Arctic expert. Indeed, his monograph, Arctic In/Security: Polar Politics, Indigenous Peoples, and Environmental Change in Canada and Norway, is forthcoming from the University of Toronto Press.

During his lunch time talk held in Victoria’s Union Club, Dr. Greaves spoke about how the post-Cold War optimism around the possibilities for greater Arctic cooperation had since given way to a period of prolonged uncertainty. In addition to new tensions among the eight Arctic states, non-Arctic countries, notably China, he added, were pursuing robust circumpolar policies that call further into question whether the current institutions for regional governance will be able to manage Arctic affairs in the coming years. For example, the European Union, South Korea, Singapore, and India have all sought Observer status on the Arctic Council as had China, which recently invested in a new ice breaker and laid out a new Arctic strategy (the Polar Silk Road).

Dr. Greaves further noted that it was important to be aware that the Arctic is not a singularity. There are, he said, many socially-constructed ‘Arctics’ involving 8 countries and 4 million people (including 400,000 Indigenous people) all undergoing rapid transformation. In particular, climate change was impacting the entire Arctic ecosystem resulting in species migration, extinctions and systems collapse. On the other hand, climate change was also opening new possibilities for natural resource extraction and other commercial activity such as fisheries, transpolar shipping and destinational tourism.

Comparing the previous Canadian government’s Arctic policy with the current one, he mentioned that before, Canada’s approach to the Arctic was much more vocal, focusing on sovereignty, a small military build-up including Arctic exercises, and promoting investment opportunities. Recently, though, the Arctic had become a much lower public priority for the government with other concerns such as reconciliation, a resurgent Russia and having to deal with an unpredictable United States, on such issues as NAFTA/USMCA, coming to the forefront.

On the question of whether to expect a polar “gold-rush” for the resources of tomorrow, or a continuing struggle for survival in one of the most challenging and isolated regions of the world, Dr. Greaves cautioned that there is much to consider. Resource extraction in the Arctic is not an easy prospect he said, and we should not expect to see major efforts in the foreseeable future. However, destinational high-end tourism to witness, sadly, the on-going decline of the Arctic was likely to increase.

Finally, Dr. Greaves noted that Canada was still very much committed to ensuring its place and role in the Arctic pointing to the recent official naming of the Harry DeWolf, the first ship built under the Arctic and Offshore Patrol Ship project. This project will deliver five ice-capable ships, with an option for a sixth.