CIC Vancouver: How to End Homophobic Laws Across the Globe

On August 1, 2019, the CIC Vancouver, in partnership with Pride Vancouver, held a public speaking event on How to End Homophobic Laws Across the Globe. Jason Jones explained how his legal victory in Jones v. Trinidad and Tobago helped set the precedent for India in getting homosexuality decriminalized, thereby guaranteeing freedom for over 50 million Indian LGBTQ2+ citizens. Moreover, Jason’s case is extremely important as it will be heard at the Privy Council in the UK within the next few years. Jason foresees that his win at the Privy Council will help overturn homophobic laws and decriminalize homosexuality in other Commonwealth countries across the globe. 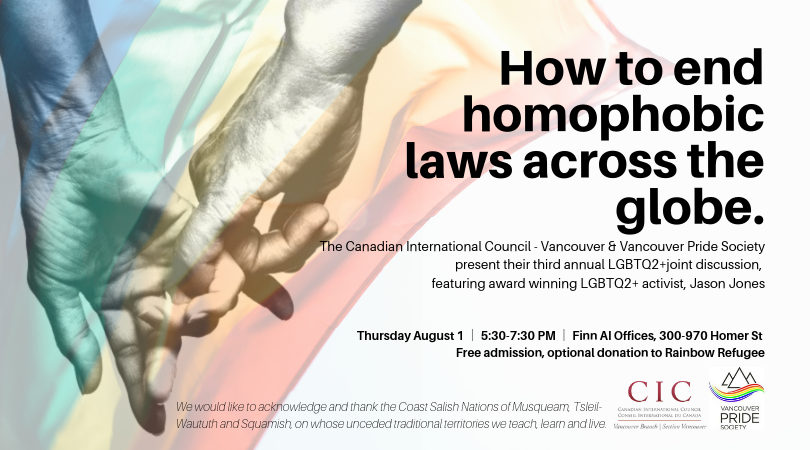 •   Diversity within our community is a strength not a weakness. Multiple identities benefit us as it gives helps shape our worldview and ideas.

•   All forms of homophobia, transphobia, racism, and discrimination need to be called out when we see it happen. What happens in our communities here have rippling effects across the globe.

•   In order to have positive impacts in our communities, we need to be questioning the status quo more. The only way to overturn these laws is bring these questions to the courts to ensure that LGBTQ2+ rights are instilled in all countries.

Jason Jones is an LGBTQ2+ Human Rights Defender from Trinidad & Tobago who has lived and worked in Britain for over 30 years. His activism in LGBTQ2+ human rights spans three decades, beginning as a student in London where he marched in the Anti-Section 28 marches of 1988. In 1992, Jones returned to Trinidad, where he founded two LGBTQ2+ advocacy organizations. Due to perpetual homophobic abuse in the press and then being completely ostracized from his family, he returned to London in 1996.

Shortly after, he became a member of the Board of Trustees for the Stonewall Immigration Group (now known as the UK Lesbian & Gay Immigration Group), which won the right of abode in the UK for the overseas partner of an LGBTQ2+ UK citizen. He and his then partner from Trinidad were one of 40 test cases at the Home Office that helped to achieve this landmark win for British LGBTQ2+ citizens. This was also the first pro-LGBT legislation in the UK post decriminalization in 1967.

On April 12, 2018, he won a landmark legal challenge at the High Court of Trinidad and Tobago which decriminalized adult consensual same-sex intimacy. This win guarantees freedom for over 100,000 Caribbean LGBTQ2+ people. The Privy Council will, for the first time in history, respond to an appeal by the Attorney General of Trinidad and Tobago in response to Jones’ victory.