On 17 MAY 2018, CIC Vancouver in partnership with the SFU School of International Studies hosted a public discussion on the evolution of international drug policy. The speaker for the event was Dr. Angela Me, Director of Research for the United Nations Office on Drugs and Crime (UNODC). Dr. Me provided a comprehensive overview of international drug policy, outlining the evolution of the policy design process, some emerging global trends, and several challenges facing countries around the world.

Overview
The event coincided with the release of the BC Coroners Services report indicating that Vancouver’s opioid crisis has gotten worse in the year-and-a-half since the provincial government declared a public health emergency. The opioid crisis is also spreading to other parts of Canada, the United States, and Europe.

• International security and sustainable development goals (SDG) need to be balanced: An overemphasis on supply-side drug interdictions by developed nations places serious constraints on the ability of underdeveloped nations to maintain equitable growth and to mitigate social harms related to drug production.

• Canada’s decision to decriminalize cannabis will put it in direct contravention of existing multilateral treaties and international accords. This unilateral policy decision raises a conundrum: How do self-declared “progressive” countries like Canada ensure flexibility while still benefiting from common standards and obligations? 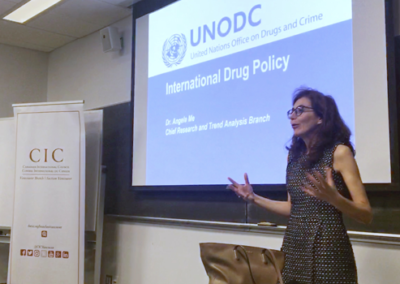