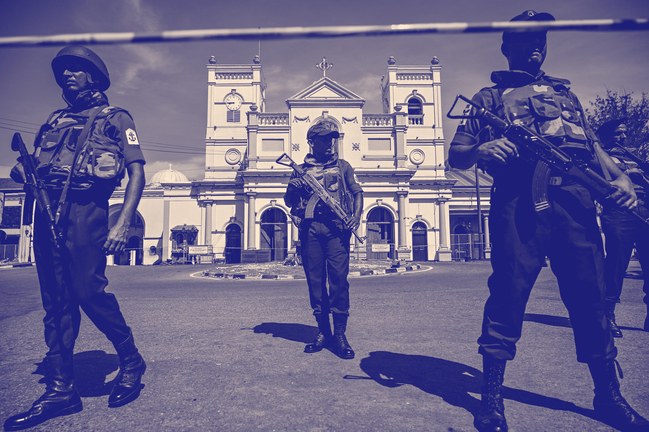 On Easter Sunday, terrorists slaughtered nearly three hundred people in Sri Lanka, in coördinated attacks at three churches and three luxury hotels. The government has said that the attacks were the work of suicide bombers from a single extremist group, and that thirteen people are being held in police custody. On April 11th, the country’s deputy inspector general had issued a letter to government officials saying that National Thowheed Jama’ath, a radical Islamist group based in South India, was planning a terrorist attack, but the Prime Minister, Ranil Wickremesinghe, has said that he did not receive the warning. Since the attack, the government has shut down Facebook and other social-media platforms, which recently were used to incite anti-Muslim violence in the country.

Sri Lanka has experienced intermittent violence since the end of a brutal civil war, which lasted from 1983 to 2009. In it, the government, dominated by Sinhalese Buddhists, who make up a large majority in Sri Lanka, defeated the insurgent Tamil Tigers, a militant group that emerged from the Tamil minority, which is overwhelmingly Hindu and makes up about fifteen per cent of the country. Muslim and Christian minorities, both of which make up about eight-to-ten per cent of the population, have also historically faced discrimination.

To discuss Sunday’s atrocities and the political situation in Sri Lanka, I spoke by phone with Amarnath Amarasingam, a senior research fellow at the Institute for Strategic Dialogue who studies extremism in Sri Lanka and the region. During our conversation, which has been edited for length and clarity, we discussed social media’s role in exacerbating ethnic conflict, concerns about Islamic extremist groups gaining a foothold in Sri Lanka, and the Buddhist majority’s “majority within the minority” complex.

What, historically, has been the relationship between the Buddhist majority and the Christian minority?

The interesting thing about the Christian community is that they span ethnic lines. There are Sinhalese Catholics, there are Tamil Catholics, so largely they have been left outside of the conflict. They have never been seen as objects of suspicion the way that the Tamil side or Muslims were, as wanting to take over the country. With Tamils you had the war and the liberation conflict, and then with Muslims you had Sharia law and what was happening in other parts of the world with the rise of jihadist movements. There were reasons for that kind of suspicion, but the Christian community was never seen along those lines—as a suspect community that was going to lead to the division of the country, and things like that.

And the relations between Christians and Muslims?

As far as I know, there was no real conflict between the Muslims and the Christians. Particularly in the east, they lived quite happily. The Tamil communities, the Christian communities, the Muslim community—it is a very diverse area. And I would say the same thing about Colombo [Sri Lanka’s capital]. There was no real conflict like that. It is partly the targeting of the Christian population that makes me think it is not just a local-born and -bred Muslim organization that planned and carried out this operation. The targeting of churches, Christian communities, during Easter has a very international-jihadist component to it, even though it hasn’t really been proved and none of these organizations have claimed it yet. I am watching isis channels like a hawk, and they haven’t said anything. They are still talking about Afghanistan and what is happening in Syria.

Why do ethnic and religious relations in Sri Lanka remain so toxic, a decade after the war?

I think part of it has to do with the nature of Sinhalese nationalism, which continues to be debated as a topic both within conservative Sinhalese communities and more hard-line Sinhala Buddhist nationalist groups that are operative within the country. Ever since independence from the British [in 1948], the makeup of Sri Lanka as a sort of mono-ethnic state has been debated within its borders. From early on, in 1956, you had what was called the Sinhala Only Act, which stipulated that Sinhala was the only language in the country, and on and on to the different kinds of constitutions, which not only made the Sinhalese language the only language but also argued that Buddhism was the only official religion in the country.

More hard-line communities have often made an argument that has often been called this majority-within-the-minority complex. This idea is that they may be the majority in the country but they are actually the minority in the broader region. If you take into account [the Indian state of] Tamil Nadu, and things like that, with seventy million Tamils just across the border, there has often been this insecurity among more hard-line members of the Sinhalese community. The idea is that this is their country, and Buddha himself had kind of granted them this country, and it would be taken away from them by minorities—and that includes the Tamil community and the Muslim community. There is an ongoing insecurity among some in the majority that there are minorities among them that don’t have an allegiance to the country and have wanted to see it divided into different zones of self-determination, and that continues to play out, even now.

We don’t know who did this, so I don’t want to jump to conclusions, but to what degree has Islamic extremism become an issue since 2009? And to what degree was it an issue before 2009?

That’s the key question. Over the past several decades, from at least the time of the conflict, or the early nineteen-nineties, members of the Muslim community have been victims of various ethno-religious conflicts. The Tamil community, particularly the Tamil Tigers during the war, heavily victimized the Muslim community. And, after the war, you had Sinhalese Buddhist groups urging the burning of Muslim businesses, and urging attacks on mosques, and things like that. We have actually seen a campaign to destroy ancient mosques. Over time, they have always been victims of either Sinhalese Buddhist authoritarianism or the Tamil community. We have rarely seen much pushback from the Muslim community.

But, from the early nineties, there have always been rumors that some elements of the Muslim community are radicalizing, and governments from the Gulf states, like Saudi Arabia, are sending in money to the country, and things like that. The rumors always circulated in the community, but no one could really prove anything. But you could feel over time that there were some elements that were becoming more conservative. Not necessarily radical, but more conservative. But we have never seen attacks of this scale in the post-colonial period.

Right, and we should also say that Gulf money leading to radicalization seems to happen in places beyond where Muslims are victimized.

Exactly. For sure. I think it is particularly interesting because of the debate that was happening in the community in Sri Lanka, particularly in the east, where people were starting to get worried that foreign money was being sent to stir things up. It is not so much that the money is unique, but the conversation in the community is unique, and there were a lot of rumors and conspiracies that went along with that. Whether that actually went anywhere or did anything is almost impossible to tell.

And not to mention that these rumors were used by both the Tamil and Sinhalese communities to start to create fear of the Muslims and see them as mobilizing against the state, and wanting to implement Sharia law in the country, and all these kinds of things. All of that was starting to happen in the nineteen-nineties and really picked up postwar. You had episodes of violence, in 2013 and 2018, where Muslim businesses were burned. You had a strong economic component to this, as well, where a lot of the Buddhist hard-liners would say things like, “Don’t go to Muslim businesses, because Muslim-owned clothing stories are sterilizing women’s panties to keep the Sinhalese population down.” Crazy things like that were circulating on social media, and then you would see Muslim businesses being burned in Colombo.

Sri Lanka, in the decade since the conflict, has had some ups and downs, and there was a bit of a constitutional crisis last year. What do you fear or expect with any governmental response going forward?

There is another important component in this, which is that we are going into an election, in December. The Rajapaksa family, which was in power during the last days of the conflict, is trying to get back into power. If past years are any indication, we might see some flare-up in terms of anti-Muslim attacks, depending on how the government plays it. For now, I think they are playing it pretty smart. They have come out and said they had warnings about it. They have shut down social media, because of all the weird conspiracy theories that were popping up. And, unlike in the past, they have not partaken in communal division. For now, they have handled it quite well, but as the election season heats up we will see more using of minorities as a ploy to stir up their base. And I also think the Rajapaksa family will again use this as an argument against the Prime Minister, to say, “This guy is weak on terrorism. This guy is not supporting the country. And now we have seen the largest attack since the civil war on his watch.” It could get ugly quite fast.

There were a lot of headlines about social media exacerbating ethnic tensions in Sri Lanka last year. Have you seen social-media networks crack down?

I think, in the Sri Lanka context, it is mostly Facebook and WhatsApp that are quite prevalent, and Facebook quite famously was used as a mobilizing point in last year’s anti-Muslim violence. We saw a lot of conspiracies, a lot of misinformation, disinformation, and that resulted in real-life violence. Facebook has stepped up to the plate a bit and recognized what happened in Sri Lanka, what happened in Myanmar, and they have come out and said they are going to do something about it. I know they have been in contact with several N.G.O.s on the ground to monitor the situation and make sure it doesn’t happen again. But we will have to see. Facebook has been open about what is happening, but whether there are actual steps is another story