Building and Keeping the Peace: An Interdisciplinary Dialogue

The Canadian International Council Winnipeg Branch was pleased to partner with the Manitoba Chair for Global Governance Studies (MCGGS), The National Office of the Canadian International Council, and the Arthur V. Mauro Centre for Peace and Justice to present Building and Keeping the Peace: An Interdisciplinary Dialogue. The conference took place at St. Paul’s College, part of the University of Manitoba from 12pm until 9pm on 1 March, 2018.

Introductory Speaker: Daniel Mach- ‘I was a Child Solider’

The conference began with a presentation from Daniel Mach who shared his personal story which began in an army camp in what is now South Sudan, to a UNHCR refugee camp in Kenya, to the University of Manitoba through the WUSC refugee scholarship program. Daniel discussed his experience as a child solider and his frustration with the way Canada and other Western nations conduct peacekeeping missions. His conclusion, after re- visiting South Sudan in 2015, was that no good can come from Canada selling armoured vehicles to the Sudanese government. He explained that peacekeeping missions as they currently operate contribute to the cycle of exploitation.

Kristine St- Pierre from the Women, Peace and Security Network discussed the lack of female involvement in the RCMP, military forces, and peacekeeping missions. She highlighted the fact that this has been on the UN agenda since United Nations Security Council Resolution 1325 was proclaimed in 2000, and yet little progress has been made. Canada’s National Action Plan for 2017- 2022 calls for greater representation of women in the military. St-Pierre said the Elsie Initiative should allow more women to participate in peace operations. Since 2000, governments have attempted to demonstrate the positive impact women have on peacekeeping missions, although St-Pierre argued women should not have to prove their usefulness.

Obasesam Okoi and Evelyn Mayanja each discussed the contradictions within ‘liberal’ peacekeeping operations, with a focus on Nigeria and the Congo, respectively. They discussed the role of powerful countries in perpetuating armed conflict due to a top-down elitist approach which does not take into account cultural differences between local regions and groups. Both emphasized the need to hold corporations and governments accountable for their exploitation of African resources. Each suggested that war provides the cheapest environments for corporations to extract resources from African countries, and that the economies of the Global North benefit from war. Mayanja discussed the local sentiment in the Congo, where peacekeeping is associated with sexual exploitation, displacement, and an increase in armed militant groups as arms are sold to corrupt governments. Each concluded that peacekeeping operations must focus on grassroots efforts and, specifically, the empowerment of women and youth.

During the question period we discussed the negative implications of ending peacekeeping missions altogether, such as the resuming of armed conflict, and the lack of a transition period for parties which experienced long- term conflicts.

Dr. Timothy Donais discussed robust peacekeeping and inclusive peacebuilding. He highlighted the problematic concept of local actors as ‘victims in need of protection’ and suggested empowering local actors instead. He admitted there is a gap in both theory and practice. Supporting the conclusions of Okoi and Mayanja, Dr. Donais stated that top-down approaches are inappropriate and ineffective, and that including gender perspectives in peacekeeping is imperative.

Dr. Kawser Ahmed discussed peacekeeping from the perspective of four protracted UN missions. He stated that at times parties do not want to resolve their conflicts peacefully, and the presence of the UN simply perpetuates the status- quo. He also discussed the unachievable nature of many peacekeeping mandates, and the fact that when these mandates are not met, rather than re-thinking them, the mission is simply extended. Dr. Ahmed suggested that there are 2 options: withdrawal of current operations, or re-define their mandates with more specific and realistic objectives. He also discussed the option of increasing non- violent peace forces.

Daria Goncharova outlined Canada’s shift from traditional to untraditional methods of peacekeeping, especially since the 1990’s. She suggested that traditional peacekeeping is almost entirely obsolete, except for three missions left over from the Cold War. She discussed the difficulty Canadians seem to have with understanding this concept, and their pre- occupation with Canada’s previous fame on the international stage for its role in traditional UN peacekeeping. [Download Daria Goncharova’s paper “Rhetoric vs. Reality: Traditional Peacekeeping in the Contemporary World”]

During the question period we discussed the need to educate Canadians through campaigns on the reality that traditional peacekeeping is obsolete. We also discussed that empowering local actors (including women and youth) is the goal, but there are gaps between theory and practice which we have not yet been able to address.

Dr. Jane Boulden discussed the issue of Canada’s limited resources when it comes to the armed forces, and the fact that this likely will not change in the coming years. She highlighted Canada’s shift from blue helmet, (peacekeeping) to green helmet, (NATO) operations. When Canada committed to participating in NATO missions in Eastern Europe, this used a great deal of Canada’s military resources. She suggested that although Canada is no longer committing to sending 600 troops for UN missions but rather only 200, this is still a huge commitment for Canada, considering our limited resources.

Dr. Sarah Jane Meharg’s presentation focussed on measuring the impact of peacekeeping missions. She discussed the two forms of research: quantitative (number- based), and qualitative, (narrative). She suggested that military operations focus on the quantitative, but stated that increasingly, peace-building requires a narrative approach, and success cannot always be measured numerically. While those studying peacekeeping are concerned with seeing short term impacts, the effects of peacekeeping missions may not display themselves for 50 years. She discussed Newtonian logic and how we tend to think of things in terms of ‘If we do this-this is the result’. She explained that peace planners want this kind of action- related result so that they can demonstrate their impact, and, in turn, receive more funding to continue their research and operations.

During the question period we discussed whether or not Canada’s contribution to the UN still merits respect on the international stage. The conclusion was that although Canada has committed to sending only 200 troops rather than 600, they are more specialized, and we are 9th in the world for the amount of resources we provide to the UN. It is more common now for developing countries to provide troops while developed countries provide money and specialised military resources to the UN for peace operations.

Dr. Novosseloff spoke about the excessive criticism of the Blue Helmets of the UN and how the nature and effectiveness of peacekeeping is generally misunderstood by the international community. She stated that the UN is simply a framework, and the UN is what the P5 make of it and invest in it. UN resources are limited, but it operates cost- effectively.  Although the UN is often associated with exploitation and failed missions, this is the work of the countries using the UN, not the UN itself. We rarely discuss the successes of the UN, and, in many conflicts, had the UN not intervened, no other organization would have provided aid. She suggested that in the future, with a decrease in resources, the UN will have to look at returning to the basics, which means fewer, and more meaningful missions with fewer troops on the ground.

During the question period we discussed the fact that the UN primarily sends peacekeepers to an area post- conflict, rather than working preventatively. We established that this is because governments are not sufficiently interested in prevention and this would not merit attention from the international community. We also discussed the role of the African Union in peacekeeping and established that the Union does not have the resources to sustain long- term peacekeeping missions. It is also difficult to unite the UN and the African Union in support of peacekeeping due to cultural differences.

Discussing peacekeeping and peacebuilding from different perspectives demonstrated the importance of educating ourselves. There were many examples of the failures of traditional peacekeeping, but also many suggestions as to how to change this to make a better future. The increased representation of women and gender training in peacekeeping, the empowerment of local actors, holding powerful nations and corporations accountable for exploitative practices, and educating the public on all sides of the issue are all imperative to the future of peacekeeping. We must work to inform the policy-makers of tomorrow about these issues. The members of the audience ended the conference by stating that the way to produce change is through educating members of the public from a young age so that these ideas are not revolutionary by the time they are adults, but are rather embedded in society’s understanding of peacekeeping. 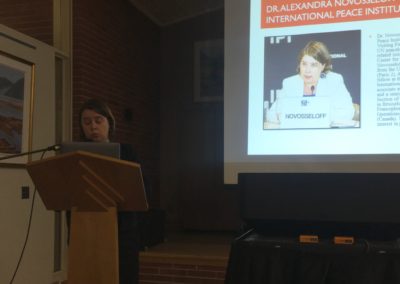 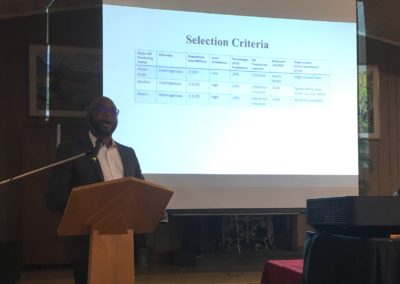