Book Review of “Canada is Not Back” 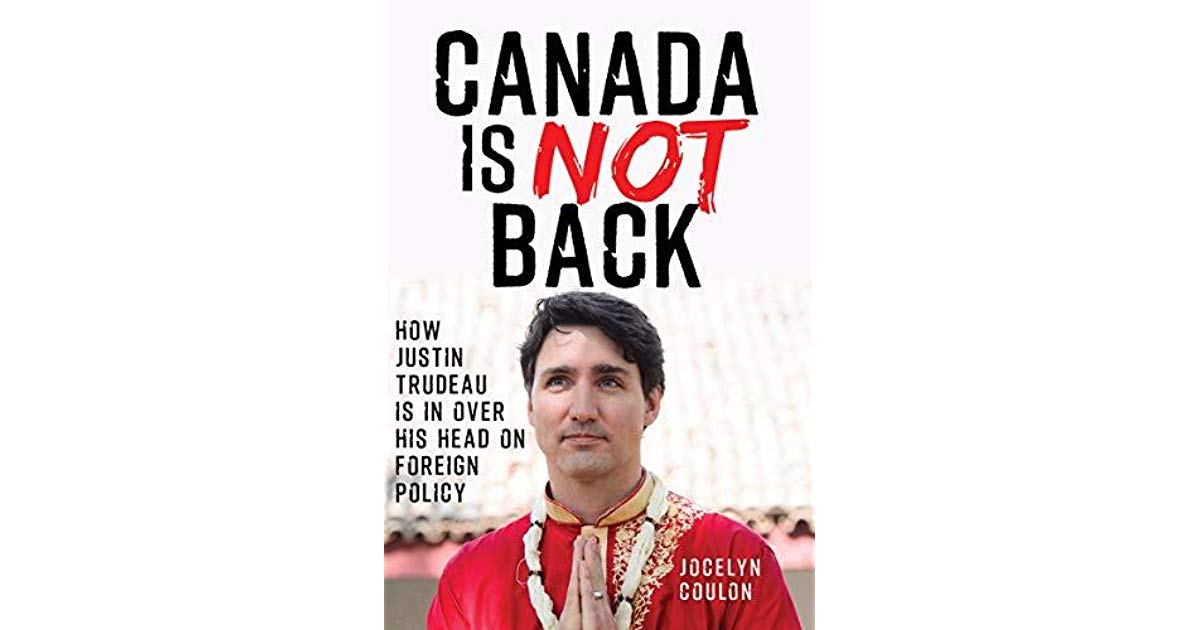 “Canada is Not Back”

The day I spent slogging through Jocelyn Coulon’s recent book on the current state of Canadian foreign policy was far from a satisfying experience.

Coulon built a solid reputation as an academic and author, and was the unsuccessful Liberal candidate in the Montréal by-election that launched former New Democratic Party Leader Thomas Mulcair into federal politics. He later served as an advisor on foreign policy in Justin Trudeau’s administration.

The key assertion of Coulon’s book is that Trudeau has badly mismanaged foreign policy and is personally responsible for the poor state of our relations with several key political and trading partners. He laid out this view in a recent Globe and Mail commentary about Trudeau’s foreign policy:

“Canada’s situation in the world has deteriorated…

its relations are rocky, not to mention poor, with four of the world’s great powers:

the United States, Russia, China and India.” i

Let’s consider each of those countries one at a time.

Coulon devotes an entire page to accusing past Prime Minister Jean Chrétien (Liberal) and Brian Mulroney (Progressive Conservatives) of demonstrating what he terms “…their complete lack of reflection” on relations with Russia. ii He goes on to argue that they – not Trudeau – put bilateral relations with Russia on a negative tone for decades.

More recently, Vladimir Putin’s invasion of Crimea and his intervention in Ukrainian politics have made it nigh on impossible for most (all?) Western governments to pursue cordial relations with Russia.

So readers could be forgiven for asking Coulon “why does Trudeau deserve full blame for the Russia relationship?” when no other Western country currently enjoys warm relations with the Putin regime.

A reasonable observer would surely not blame Trudeau for China’s over the top reaction to Canada’s arrest of Meng Wanzhou, the Chief Financial Officer of Huawei, at the behest of American authorities seeking her extradition. One can only imagine the reaction of the Trump administration had Canada refused its extradition request for Ms. Meng. The subsequent arrest of two Canadian businessmen in China – the first arrest taking place ten days after Ms. Meng was taken into custody – is certainly not Trudeau’s fault. He cannot be faulted for refusing to accept China’s demands for the release of Meng as a precondition for China’s release of the Canadians.

As for the United States, what country has not experienced serious challenges in dealing with the Trump administration? John Ivison is one of several pundits who argue that, despite having made several serious mistakes, the Prime Minister and his Minister of Global Affairs Canada, Chrystia Freeland, performed exceptionally well on the U.S. file.

“The one file where Trudeau’s performance was ranked consistently higher than his overall approval rating was Canada-U.S. relations

– particularly his dealings with Trump

and the President’s increasingly shrill demands on the trade front.” iii

Coulon also claims that Trudeau moved Stephane Dion out of the Foreign Affairs portfolio largely due to personal animus. Still, he devotes two full chapters outlining Dion’s unsuitability as Foreign Affairs Minister. And in a seeming contradiction to his criticism of the Prime Minister’s alleged mean-spirited motives for firing Dion, the author refers to Freeland’s appointment as being that of “…the right person at the right time.”iv

The importance of the bilateral relationship with the U.S. made it critical to appoint a Minister whose personal qualities were tailored to deal effectively with the jab and thrust of the erratic bullying of Donald Trump. The same could be said regarding Xi’s China and Putin’s Russia for which Freeland’s fluency in Russian and Ukrainian and her very impressive career in international journalism afforded her the experience to know the challenges she would face dealing with these leaders.

One can indeed point directly to Trudeau’s disastrous 2018 state visit to India for the recent coolness of Canada’s relationship with this growing power in the Asia-Pacific region. Oddly, Coulon largely ignores the India file.

Despite the author’s evaluation of Trudeau’s overall foreign policy performance as devastating, he describes Trudeau’s Syrian refugee program as “bold” v.  He also applauds Trudeau’s decision to use former Prime Minister Mulroney as an expert advisor on managing Canada’s response to Donald Trump’s arbitrary re-opening of the NAFTA.vi

This book is rife with such contradictions.

Coulon failed to convince me that Trudeau’s conduct of foreign policy during an extremely complex and turbulent period was the abject failure he claims. Thus, I believe that readers expecting a tightly organized critique of contemporary Canadian foreign policy will be disappointed with this book.

[i] Coulon: “Opinion: What happened to Canada’s goal of restoring our role on the world stage?: Globe and Mail, September 9, 2019.

[ii] Globe and Mail, September 9, 2019. ii Coulon: Canada is Not Back….: Ibid: Page 138. Coulon also expresses annoyance at the circumstances that led to Roland Paris being dropped by the Prime Minister’s inner circle. See Page 38

[vi] Coulon: Canada is Not Back…: Ibid: At Page 176, the author writes “Trudeau discretely contacted Mulroney, asking him to use his contacts to moderate the fervor of the new President.”