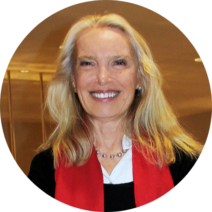 Patricia is a former Ambassador, and Assistant Deputy Minister

Patricia A Fortier is a retired Canadian diplomat whose career focused on political relations, governance, international security, consular/crisis management, and trade/ investment. She is currently a Fellow of the Canadian Global Affairs Institute, Senior Fellow of the Graduate School of International Affairs at the University of Ottawa and on the board of the Canadian Retired Heads of Mission Association. She acted most recently (2016) as Assistant Deputy Minister responsible for Security, Consular, and Emergency Management in Global Affairs Canada. Other assignments in Ottawa included Director General, Consular Operations (2009-11) and Director, Peacekeeping and Regional Security (1995-2000) when she was also ex-officio director on the board of the Pearson Peacekeeping Centre.

She was Canadian Ambassador to Peru and Bolivia (2011-5) and Ambassador to the Dominican Republic (2006-9) as well as Minister-Counsellor (Political) at the Canadian Embassy in Washington, D.C. (2001-5). Her work abroad also included Senior Advisor to the OAS Electoral Observation Mission to Peru (2006) and Chief Advisor to the High Level Mission to Peru (2000-1). In Costa Rica, she worked with international NGOs on climate change (Earth Council 1994-5) and human rights/democracy (Instituto Interamericano de los Derechos Humanos 1992-4). Other postings included Chile (2000), Canadian mission to the United Nations in New York (to support Canada’s seat on the Security Council 1989-90), India ( Immigration 1987-89), Kenya and Zambia (Development) 1984-87).

Before entering the Canadian Foreign Service, she was Director of Policy Planning for City of Edmonton Transit (1981-3) where she helped plan the city’s first Light Rail Transit system.

She has a Master’s in Public Administration and a BA (Hons) from Queen’s University in Kingston (1979) and was a Weatherhead Fellow at Harvard University in Cambridge Massachusetts (2005-6). In 2016, she attended the first “Women as Directors” course at the Harvard Business School. She speaks English (mother tongue), Spanish and French.