Join us in remembering Bill Graham, our Co-Chair, and a historic leader of Canada’s international relations 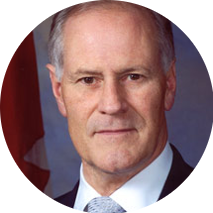 Contribute your reminiscences about Bill >>

We are heartbroken to share that on August 7, 2022 Bill Graham passed. We invite you in sharing our gratitude for Bill’s service and our condolences with those who were closest to Bill, his wife Catherine, his children Patrick and Katherine, his extended family, and his friends.

Bill will be sorely missed; he was a remarkable individual whose strong character has left a deep impact on Canada as a whole. His commitment to the Canadian International Council did not stray from his dedicated history to Canada’s social and political life. Following a brief time as Vice-Chair, Bill served as the Chair of the CIC from 2014 until 2021. He later continued his diligence in supporting the CIC by assuming a Co-Chair position of the Board of Directors alongside John English from June 2022 onwards. Bill’s impact on the organization cannot be forgotten, his extraordinary energy will continue to inspire the leadership and direction of the CIC for years to come.

In his life-long political career, Bill fulfilled a myriad of roles with dignity. Following being elected as the Member of Parliament for Toronto-Centre-Rosedale, Bill chaired the Standing Committee on Foreign Affairs and International Trade alongside John English. He further became the Minister of Foreign Affairs, Minister of National Defence, and elected Founding President of the Inter-Parliamentary Forum of the Americas. Bill would later fulfil the role of Interim Leader of the Opposition in 2006. Those who served with him in politics universally found him to possess that rare combination of being effective and extraordinarily decent to his team members.

Bill’s selfless character and devotion extended into civil life. Bill was committed to enhancing French culture and fostering a French community in Toronto, having served as the President of Alliance française de Toronto. He further showed a remarkable commitment to students, with not only taking the time to be a guest lecturer, but through his time as Chancellor at the University of Toronto’s Trinity College from 2006 until his passing.

Above all, Bill was a wonderful human being. He graced the lives as well as the careers of those who knew him. Bill’s passing is a significant loss to Canadian life as a whole.