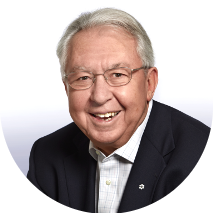 Dr. Savvas Chamberlain was a professor of Engineering at the University of Waterloo for more than 25 years where he developed new technology and successfully commercialized it in Canada.  His research spans from the mid-1960’s to the mid-1990’s and is published in more than 125 refereed publications.  Savvas pioneered new semiconductor device theories and new innovative CCD imaging semiconductor devices, including their associated fabrication processes which earned him 22 patents in semiconductor design and fabrication.

In 1980, Dr. Chamberlain founded DALSA Corporation, a successful semiconductor and electronics company in Waterloo, Ontario.  As its CEO, he grew DALSA to $250 million revenue, with more than 1,000 employees world-wide.  In 2011 he resigned from the company, however in February 2011, US and Canadian hedge funds forced him to sell the company. Savvas executed a successful sale to Teledyne Technologies International Corp of California, where the buyer agreed to keep the DALSA ongoing operations in Waterloo, Montreal  and Bromont, Quebec. The company is presently called TeledyneDALSA and has its Canadian headquarters in Waterloo.

Various organizations recognized Dr. Chamberlain for his achievements, and named him a leader in his field.  He is a member of the Order of Canada, Fellow of the Royal Society of Canada, Fellow of the Canadian Academy of Engineering, and Fellow of the IEEE.  He was awarded the Ontario Premier’s Catalyst award for Lifetime Achievement in Innovation, as well as the Automated Imaging Association (AIA) Lifetime Achievement Award. In November  2012 he was inducted in the Waterloo Region Entrepreneur Hall of Fame.  He is a Distinguished Professor Emeritus and Honorary Dr.Eng Degree recipient of the University of Waterloo, and he holds MSc and PhD degrees from Southampton University.

Savvas actively participates in and contributes to Canadian Institutions for the betterment of Canadian society. Organizations he supports include the Kitchener-Waterloo Symphony, the Stratford Festival, the Waterloo Region Food Bank, the University of Waterloo, Wilfrid Laurier University, the Perimeter Institute, the KW Community Foundation, the local chapter of Canadian Federation of University Women (CFUW) and a number of organizations aiding the disadvantaged .

He has created a number of endowments for annual charitable contributions, including an undergraduate scholarship endowment fund and graduate endowment fund at the University of Waterloo in Electrical and Computer Engineering; the Lenia Chamberlain Memorial Graduate Scholarship with CFUW and Wilfrid Laurier University for an annual graduate scholarship in Culture and Religion; and the Savvas and Lenia Chamberlain Endowment fund with the Kitchener-Waterloo Community Foundation for annual charitable donations for the needy in the KW community.

In December 2010, he founded and funded The Savvas Chamberlain Family Foundation, a charitable organization which provides funding for projects for the disadvantaged, education, health, arts and culture, and the preservation of the environment. Since its establishment, the Foundation has donated significant amounts and pledged several million over the next five years.